Hair Loss – How it should be managed.

Hair loss, thinning, balding, alopecia, receding hairlines – these are things that are experienced by roughly 50% of people on the planet. When it comes to losing hair, there are currently a few different approaches to managing this extremely common type of condition in both men and women.

Before beginning, however, it is important to note that while hair loss can be extremely upsetting, and even traumatic, for many people who experience it, there is nothing wrong with losing hair, and there is absolutely nothing wrong with not being bothered by your hair loss as well. It is a natural occurrence, and some do not mind, however if it does bother you, as it does with most people, then there are many effective and proven ways to manage it efficiently.

To understand how to treat and manage hair loss, one must first understand what is happening. The most common form of hair loss is called androgenetic alopecia  or genetic pattern baldness. This condition, and your particular pattern of hair loss, is basically pre-determined in your genetic make up. This means that if you possess the ‘hair loss gene’ it is inevitable that, at some stage in life, your pattern of loss will begin, and it will run it’s preordained course naturally, unless you intervene. There is no set age for this pattern to begin, it can start in the mid teens or may not activate until the later 40s and 50s. External factors, such as poor health, smoking, trauma to the hair or scalp etc, can in some ways accelerate the hair loss, but it is in essence an internal issue. 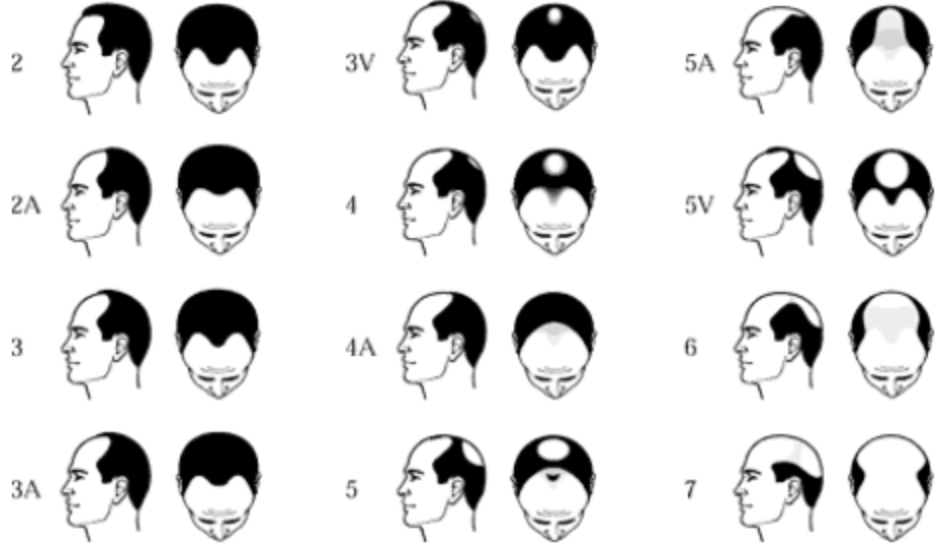 The main culprit responsible for androgenetic alopecia is a hormone called DHT or Dihydrotestosterone. This hormone is produced from testosterone in certain tissues in the body, and has some function in the development of certain characteristics in the early stages of growth, as well as in the normal regeneration and rest process for the hair, however DHT unfortunately has some negative effects on the body as well.

If you posses the gene for androgenetic alopecia, certain hair follicles on your head will contain receptors for DHT. In men, these are typically the follicles on the top of the scalp, you will generally see a similar pattern in most balding men of a receding hairline, a bald mid-scalp and/or an empty crown or vertex, with the hair around the back and sides of the head remaining. The specific pattern and severity of loss depends on the genetic pattern. Women tend to display a more diffuse effect of hair loss, with general thinning and loss of density.

When DHT binds to a receptor on a hair follicle it begins the hair loss process, starting with something known as ‘miniaturisation’ of the follicle. The blood supply to that follicle gradually shuts down over time, starving the hair of the blood, oxygen and the nutrients required to grow. The hair begins to get smaller over time, losing thickness in the shaft, rigidity and strength. This process also increases the telophase of the hair, which is the natural resting phase each hair will experience at periods of its lifetime.

By gradually increasing this resting phase in multiple follicles, less and less hairs are in the active growing phase at the same time, and the appearance of thinning and baldness increases. Eventually, the hair attacked by DHT will stop growing altogether, and this is your balding, thinning, receding etc. However, here is an important note: Depending on the severity of the hair loss, in many cases the hair follicle is not dead, it is simply in a dormant phase, and will not grow unless it receives a stimulus and the ingredients it needs again. 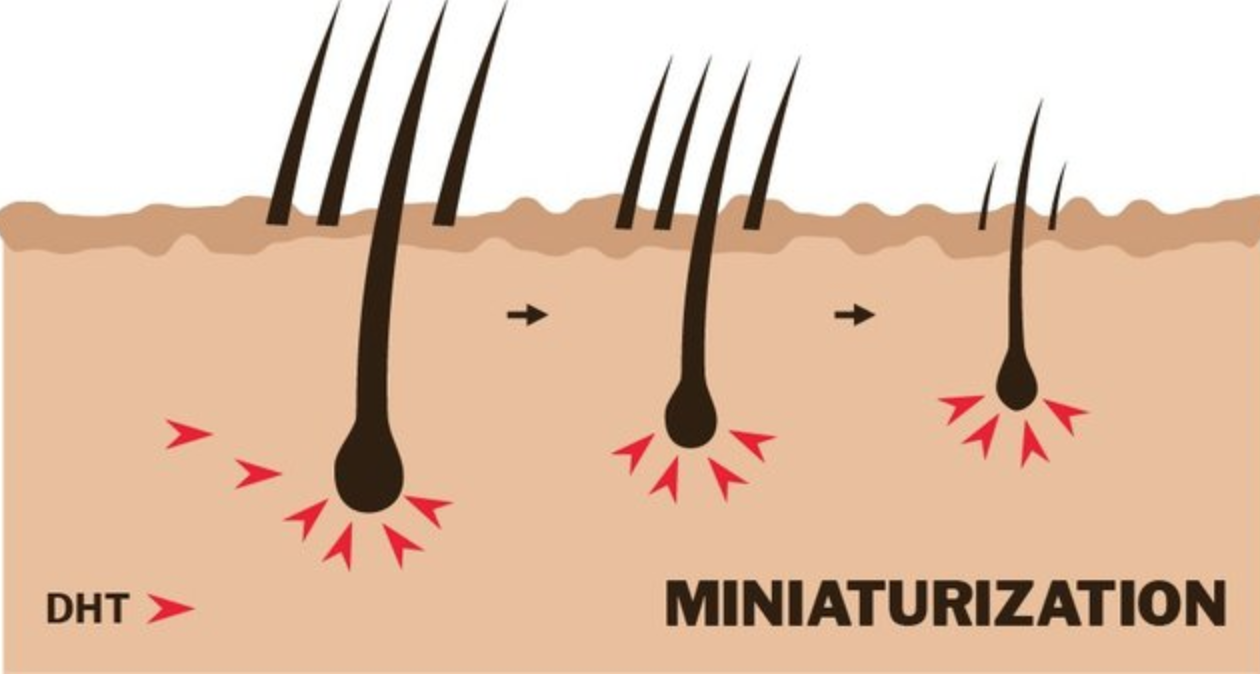 This leads to what is important to understand about treating hair loss. Firstly, as you can now see, hair loss is an internal and systemic condition. It can be somewhat influenced by external factors, but these factors tend to slightly accelerate or decelerate the loss, they don’t stop or reverse it. To this point, it is easy to see why most, if not all, topical treatments for hair loss tend not to work.

Your skin is an excellent barrier, one of the most efficient we know in fact, so rubbing, pouring, sprinkling, massaging, dropping, or patting lotions and potions onto the scalp in the hopes of “nourishing the hair” or stopping the hair loss doesn’t really make sense. And this ties in generally with the hundreds and thousands of disappointed and disillusioned users of the many over-the-counter shampoos and serums for hair loss.

Secondly, while hair transplant procedures are excellent and can provide incredible results when performed correctly, jumping straight to a surgical procedure to manage hair loss seems like an extreme option for many; when you consider how the condition works, there must be other effective ways to manage it for those who’s hair loss might not be severe enough to warrant surgery?

What are the Options?

Hair loss can be viewed in the same way as something like diabetes. If you go to your doctor and are diagnosed with diabetes, hopefully he/she will not simply give you a prescription for insulin and send you on your way. Diabetes requires a deeper look at things like your weight, nutrition, exercise, stress levels and so forth to create a comprehensive treatment plan for you to manage the condition effectively, alongside your insulin treatment. Hair loss is not so different.

With hair loss we have 3 main angles to the approach: 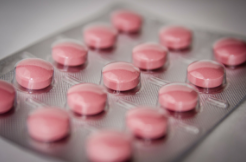 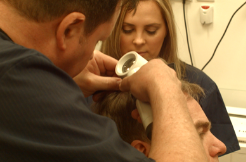 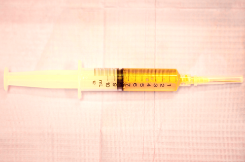 There are medications available that can in fact stop the effect of DHT on the hair, and these are known as 5-alpha-reductase inhibitors. In a nutshell these medications, namely Finasteride and Dutasteride, can in theory prevent up to 100% of hair loss. When taken early on in the hair loss process, these medications can essentially stop the loss, and in many cases eliminate the need for any further intervention or treatment, ever. These medications are generally used as a part of any comprehensive hair loss program, for all except the most extreme and end-stage cases of hair loss, where they would be least effective. The medication is often used alongside the other two steps in the treatment plan to provide the best results.

It is important to note that there are concerns surrounding these medications and potential side effects, so it is vital to discuss this with an experienced and well researched professional in the hair restoration industry. For more information on Finasteride/Dutasteride you can visit www.hrinstitute.ie or contact the NuaCell team.

There are two main ways to intervene with hair loss, and these can be classified as surgical and non-surgical. Non-surgical refers to a treatment called scalp micro pigmentation, which is a cosmetic option involving the use of special pigments to create the impression and appearance of hair on the scalp.

Surgical intervention refers to hair transplant procedures. Currently there are two main types of procedure, FUT (Follicle Unit Transplant) which involves removing a strip from the back of the scalp to harvest follicles for the transplant area, and FUE (Follicle Unit Excision) which involves the removal of each individual follicle one by one from the scalp for the transplant area. FUE is fast becoming the more popular option for most clients.

This is the piece of the puzzle which utilises the regenerative and stem-cell-based therapies. As we know, when a follicle is dormant due to DHT, it may still be encouraged to grow again and produce a hair, if it receives the right stimulus. This process involves the use of several treatments aimed at stimulating that growth by encouraging the release of growth factors, prostoglandins, leukotrienes and many of the other important compounds required for the growth of new tissue. Treatments such as PRP, PRF, Carboxytherapy, nano-fat and Growth factor injections can be used as part of a prescribed hair loss management program to do exactly this.

These treatments can be used as stand-alone options, or as adjunctive treatments to the prevention and intervention steps mentioned above, depending on the individual case of hair loss. For example, a person having a hair transplant who combines this with stimulation treatments generally experiences much faster, stronger growth, better results, multiple hairs growing per follicle etc, and can also maintain and improve those results long into the future with basic stimulation protocols. A benefit of this type of treatment is that they are based on the body’s ability to regenerate and regrow itself, and as such are known as ‘natural’ or ‘green’ types of treatment. Having said this, it is incorrect to claim that they are free from potential risks; if you are considering having a form of stimulation treatment it is vital to consult with an experienced professional to ensure you get the most benefit, and are a safe candidate for treatment. 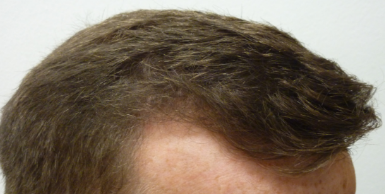 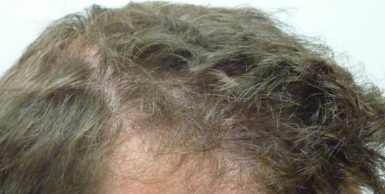 From a regenerative medicine standpoint, hair loss is best managed with a combination approach. Stimulation therapies provide us with options to actively trigger the growth of hair by approaching the issue internally, targeting the issues we understand to be causing the loss in the first place. Alone, these treatments provide incredible results for many clients. Used alongside medical and surgical treatments, stimulation therapies are even more effective, and can enhance the effects of these other modalities. This can be seen in many fields of medicine, but is particularly true for hair loss and restoration.

If you would like to learn more about hair loss, hair restoration or any of the treatments mentioned above, please feel free to contact the NuaCell team.

Sign up to our Newsletter to receive the latest updates from the world of Regenerative Medicine!

Our newsletter will contain articles, blogs and podcasts relating to the newest advances in stem-cell based therapies, regenerative medicine and all of the available treatments to improve your health and wellness

You have successfully subscribed! Please check your email to confirm it.

*Please check your email for confirmation.